Since its foundation in 1993, PROA has always been trying to offer higher safety to navigation on the sensitive and curved rivers in Western Amazon.

Before the difficulties on keeping the region nautical charts updated, due to changing in the navigable canals caused by constant changing of the sandbanks and the river borders break (a natural phenomena known by the locals as: “falling lands”), the appearing and disappearing of islands, PROA has started a gauging work on the rivers of its Piloting Zone. The first gauges were performed with the use of a wooden speed boat, named Rio Içá, which despite all its modesty, was able to keep safe the rivers of that region, even in periods of drought.

Once the ships on traffic in the region have become big-sized as well as their hulls, PROA felt the need of hastening its service and getting higher accuracy in its results; aiming at these results, PROA has invested its own resources in an innovative project.
In 2003, the project “Airuwe” (manatee, in Ticuna Indian language) became true. This project consists in a gauging speedboat with state-of-the-heart equipments for monitoring the stretches of the western rivers in the Amazon.

The Airuwe speedboat counts on VHF, and SSB equipments of radio, and telephony, and data transmission via satellite, through which all the bathymetry survey can be transmitted in real time; this way all collected data may be passed straight to the embarked pilots travelling through the rivers in Western Amazon or to the Piloting Stations (Watchtowers).

With speed and maneuverability superior to the legendary Rio Içá boat, Airuwe made new expeditions possible. Presently, besides all Solimões River from the Meeting of the Waters up to Brazil western border in the municipality of Tabatinga City; the stretch of Amazon River between Manaus and Itacoatiara; the stretch of Negro River between Manaus and the city of Novo Airão (where it is located the largest river archipelago in the world - Anavilhanas), surveys have also been carried out in Purus River from its mouth up to the city of Lábrea; in the stretch from the mouth of Juruá River to the city of Carauari, and in Jutaí River, from its mouth up to 20 miles navigable for cruise ships.

In 2005, seeking further security in navigation, PROA started tracking its sailing in Western Amazon Region with an electronic navigation system that is constantly updated and that complements Airuwe project, once it allows the accuracy of polls to be accompanied in real time. 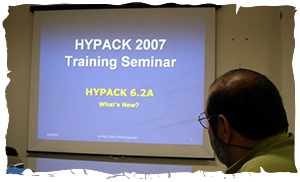 In order to improve the survey service, PROA constantly participates in courses and lectures on hydrography promoted by agencies such as the DHN (Directorate of Hydrography and Navigation - Rio de Janeiro) and Sight GPS in Rio de Janeiro; as well as bringing to Manaus experienced professionals to minister courses on Hypack program updates, a bathymetry program used by PROA, and the most renowned institutes.
New steps are already being taken aiming at the maintenance of the rate zero of shipping accident on Amazon western rivers.