The Amazon basin with its quaternary-tertiary formation is the largest watershed in the world, draining approximately one quarter of South America area, flowing off about one fifth of all fresh water on the planet

In this basin, due to its huge drained area, with approximately 6.217.220 km², it forms the biggest fluvial archipelago in the world; the Mariuá Archipelago, which comprises more than 700 islands. It is located in Negro River, near Barcelos county. Besides containing the biggest archipelago, the basin also holds the biggest complex of rivers in the planet with approximately 1.700 rivers; more than in the whole Europe; the world largest flooded biological reserve, Mamirauá Ecological Reserve; the biggest fluvial-marine island in the planet - Marajó Island with more than 50,000 km2. It is located at the mouth of the Amazon River, the world's largest river both in volume of water and length, 6,750 km.

The Amazon Basin is connected to two other basins: to the north with Orinoco River basin, in Venezuela, and to the south with the Platina Basin, through Cassiquiare channel. 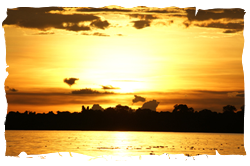 The Amazon River, the main axis of the Amazon Basin, was first discovered in January in the year 1500 by the Spaniard Vicente Yanez Pinzon, who called it "Mar Dulce" (Fresh Water Sea), and later by Francisco Orellana, who traveled from west to east in 1541; he named the river in homage to the presumed female warriors found at the mouth of Nhamundá river.

It holds the world's highest water flow, and it shall throw into the sea, roughly about 200,000 to 240,000 m³/s of water. To get an idea of this phenomenon in numbers in its mouth the Amazon is able to deliver in 28 seconds, one liter of water to each of the six billion inhabitants of the planet. Such flow occurs with such force in the Atlantic Ocean that its waters reach about 150 km from the coast.

Each and every year, this colossal river increases in 1 km the coast of Guyana and Brazil. The amount of sediment that the Amazon River drags and deposits in the Atlantic Ocean is so big that if we put it together for a year, it would reach the height 10 times bigger than the Sugar Loaf mountain in Rio de Janeiro. 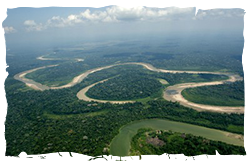 It is a right bank tributary of Rio Solimões. Born in Sierra Contamana (watershed with the Ucayali Basin), in a place called Centro das Mercês in Peru. It presents an extension of 3,350 kilometers with its mouth located near the village of Tamanicoá, about 450 miles upstream from Manaus. It is the most winding river right on the Amazon right bank. 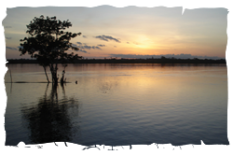 This river is born in Peru at an altitude of 500 meters approximately. Its main tributaries are the streams Cuiuja and Cujar, and after the confluence of these streams it is called the Purus. It's a right bank tributary of Solimões River with an extremely winding path and no rapids. 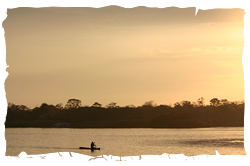 It is considered the most important tributary of Amazon River in its right bank. Madeira is formed by other rivers which come from the Andes Mountains, Andean Plateaus (Beni and Madre de Dios rivers) and Central Plateau (Guaporé River). 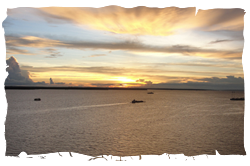 The Negro River is born with the name of the Guainia in the Sierra of Tunai in Columbia Plateau about 1660 meters altitude. Its total length is 1,700 km, approximately. In Brazil, this river is named Negro from Cucuí county, in the border with Colombia and Venezuela, and it flows into the Amazon River in front of the city of Manaus. It has good depth, which allows navigation of ships with large drafts. The Negro River is the most important black water river in the fluvial net of the Brazilian basins. Its bed is composed of clay, sand and stones.